The news release stated, “The new off-road cycleway will provide a link for cyclists from the Coppid Beech/A329M roundabout into the town centre.”

However, the off road route, a shared footway and cycleway suddenly ends at a point between Rances Lane and Binfield Road (see photo). This is just over 1 KM short of the town centre. 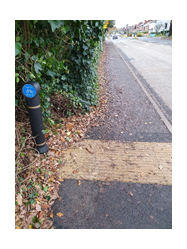 The news release also stated, “Completion of work on London Road means the council has completed its parts of the National Cycle Route 422 and one seamless route through Berkshire.” It is quite clear that the route has not been completed there are similar gaps in the route west of the town centre and beyond and it is not seamless.

Would you allow a 12-year-old child to cycle on the London Road from this point into the town centre on their own?

There has been an opportunity missed here by the Wokingham Borough Council. There is sufficient space to have created a segregated cycle route and leaving the existing footway for pedestrians.

That would have meant a much higher standard and safer for cyclists and pedestrians.

An example of a similar scheme is shown in the photo. This is also on a ‘A’ class road and constructed 12 years ago. 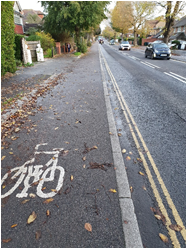