CHALFONT WOODS (AREA DD): Potentially a massive victory for residents, but the devil will be in the detail.

Earley residents and Liberal Democrat Councillors have consistently fought hard to retain Chalfont Woods as a valued green space. Hawkedon Councillor Clive Jones says, "As little as three years ago there were firm plans to build on this Wokingham Borough owned land. The Council’s dramatic U-turn during 2019 still left many of us worried that, despite our numerous requests, the Executive Members would not commit to protecting the woods in perpetuity.”

Chalfont Woods are in Cllr. Caroline Smith’s Hillside Ward. She added, “During the Wokingham Borough Council meeting, Executive Member Cllr. Gregor Murray stated that the woods will be managed using a climate emergency based strategy that residents will be consulted upon. This might be a great relief to all those who campaigned against plans to build on the woods.”

“I am told that Chalfont Woods is the last ecosystem of its specific type in the area and many believe it should be retained as such. Earley Town Council (ETC) had sought to protect the woods by seeking their transfer to ETC  so that the woods could be be managed and protected for all future generations as a Nature Reserve. I am not aware of any response to ETC’s request, and disappointed that the Executive Members are making announcements to the Council instead of engaging in with residents and our Town Council.”

Clive Jones concluded, “We have climate and biodiversity emergencies.  Residents and my colleagues will be looking very carefully at the detailed proposals for Chalfont Woods, and will hold (the) Cllr. Murray to his promise to engage in public consultation. We will insist that  the current biodiversity  of the woods be fully protected forever.” 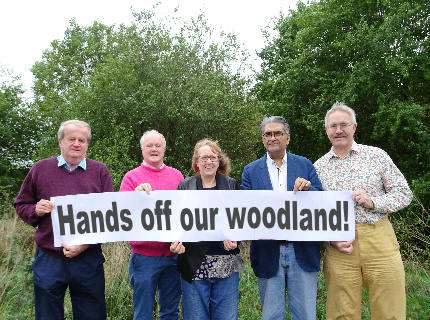